The popular Extension publication A Pocket Guide to IPM Scouting in Highbush Blueberries has been revised (April 2015) and is again available from Michigan State University. This third edition includes information on new pests that have emerged since the previous revision in 2008, most notably Spotted Wing Drosophila.The cost is $19.00 each, with discounts for volume purchases. For more information, see: http://shop.msu.edu/product_p/bulletin-e2928.htm 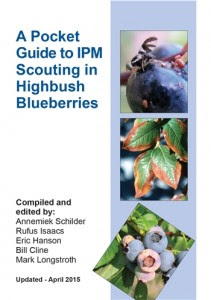 The propagation house at the NCSU Horticultural Crops Research Station in Castle Hayne is a fairly simple covered structure that we use when propagating blueberries and muscadine grapes under intermittent mist. 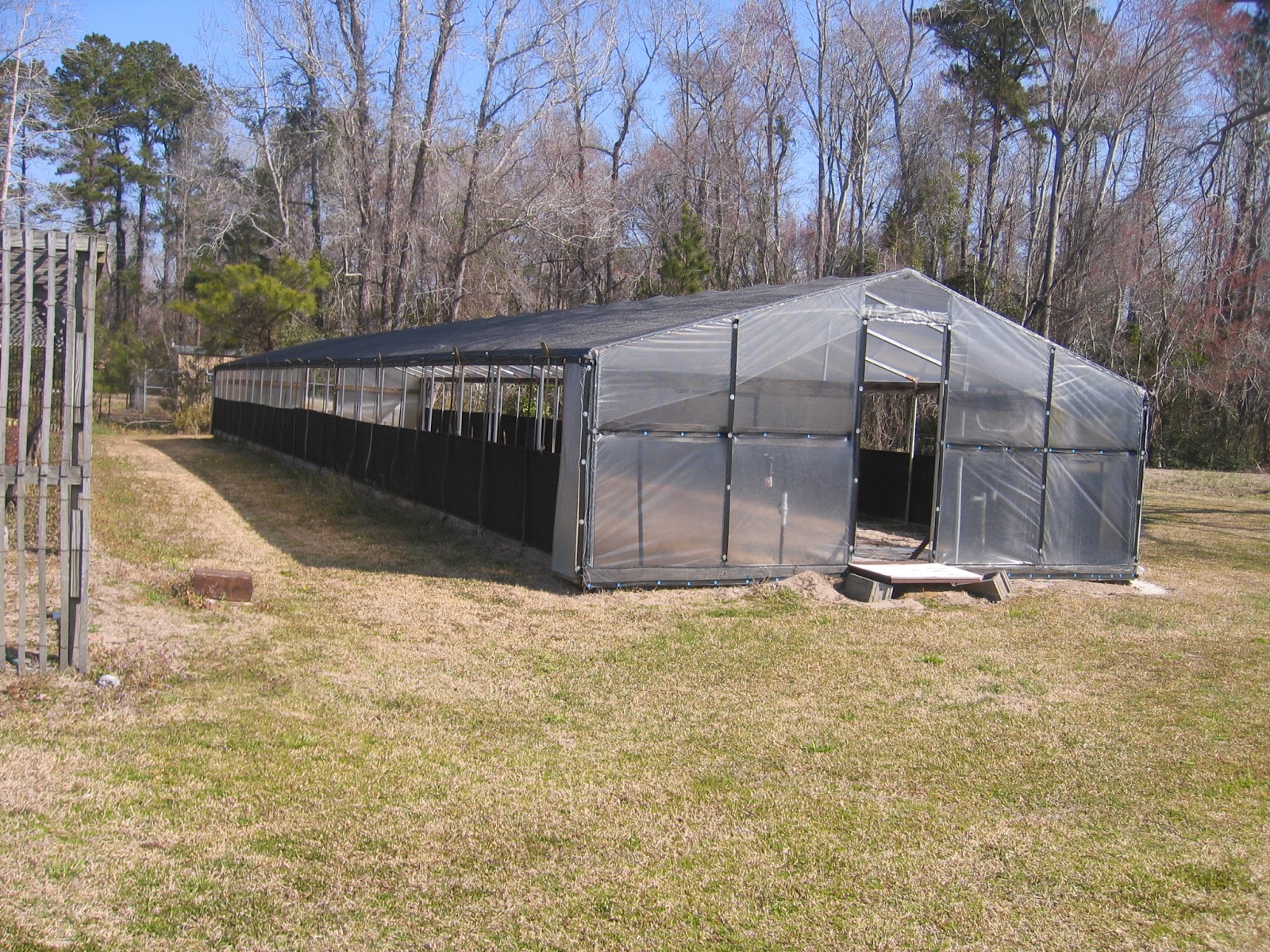 The base consists of an 18-inch-deep layer of sand to ensure drainage.  The wood-and-wire-mesh rooting beds are placed directly on top of the sand and filled with pine bark or other rooting media, and the sand does a nice job of "wicking" away any excess water that might otherwise cause waterlogging. 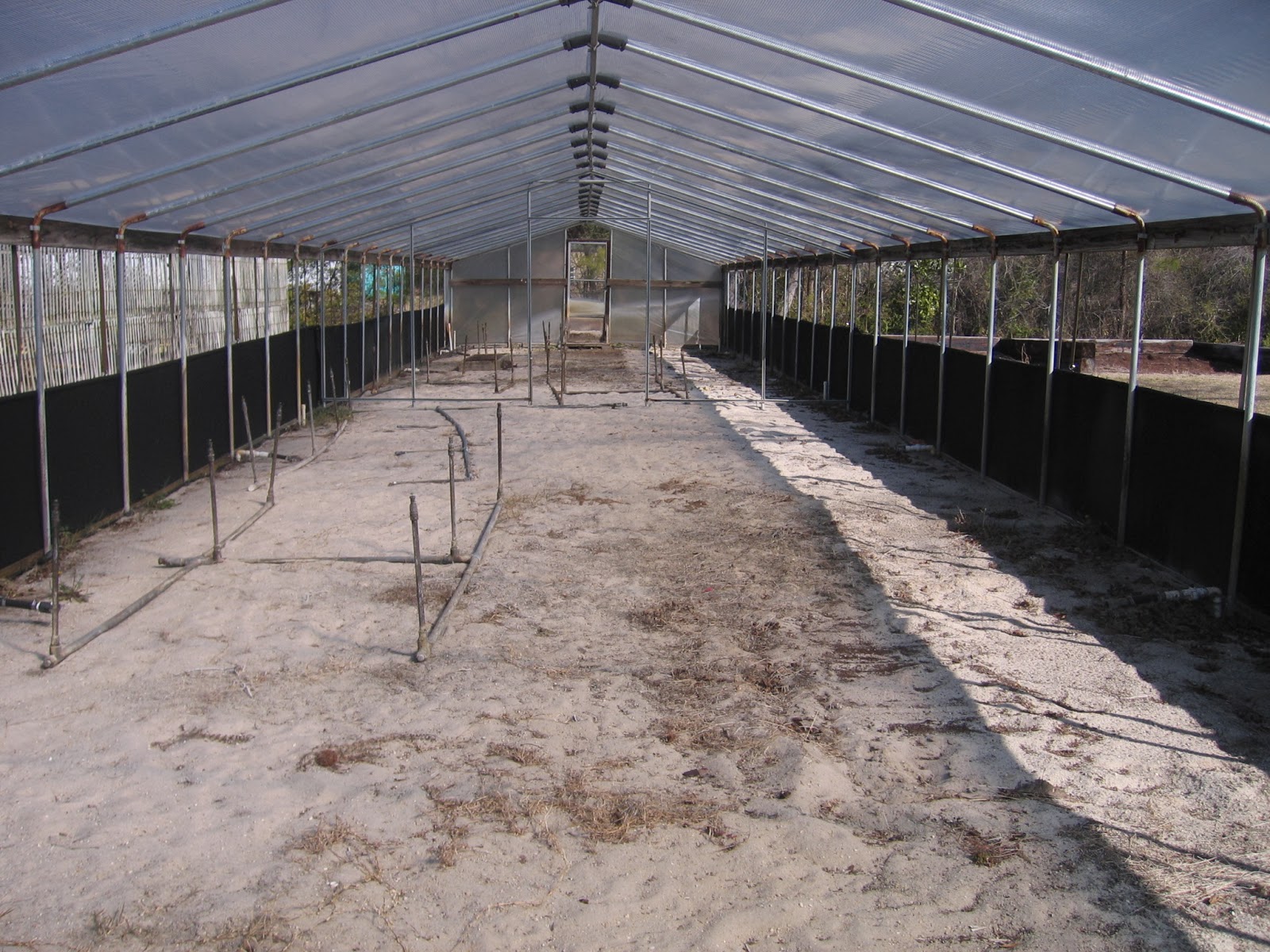 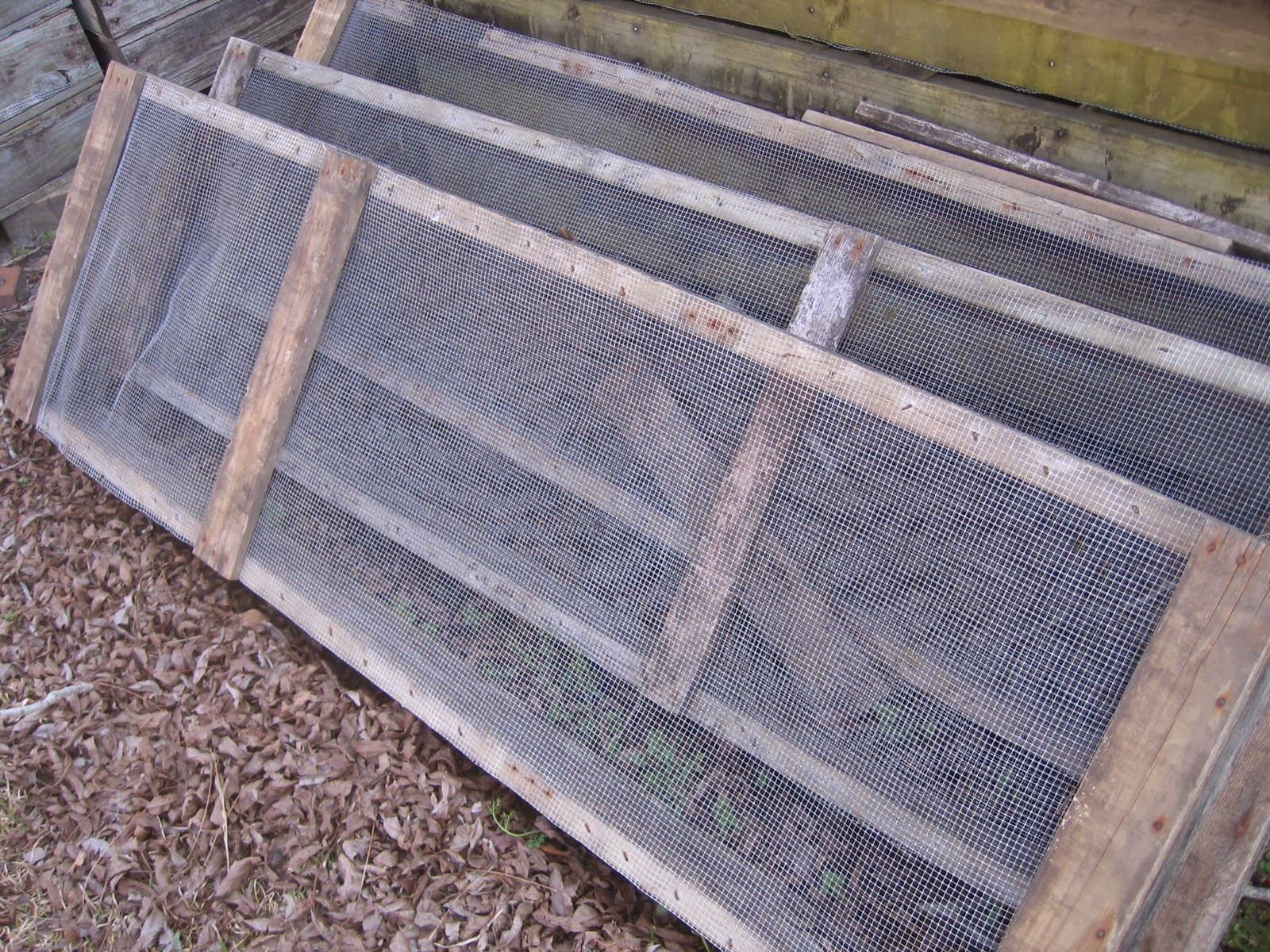 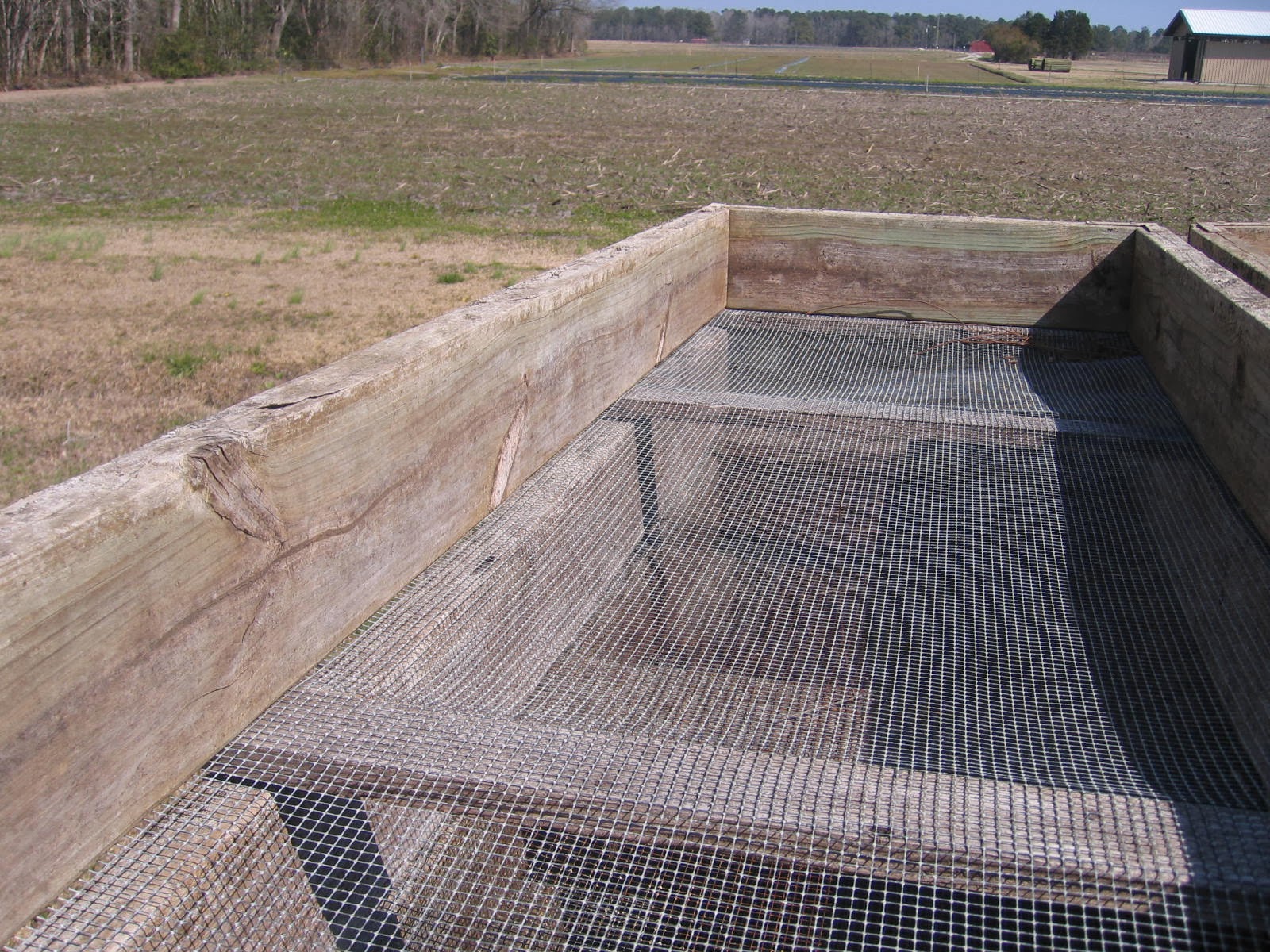 The structure has a plastic roof that is replaced as needed (every 2-3 yr) and we usually cover this with an additional layer of shade cloth.  Rooting under a covered structure excludes rain and gives us better control of moisture and humidity. 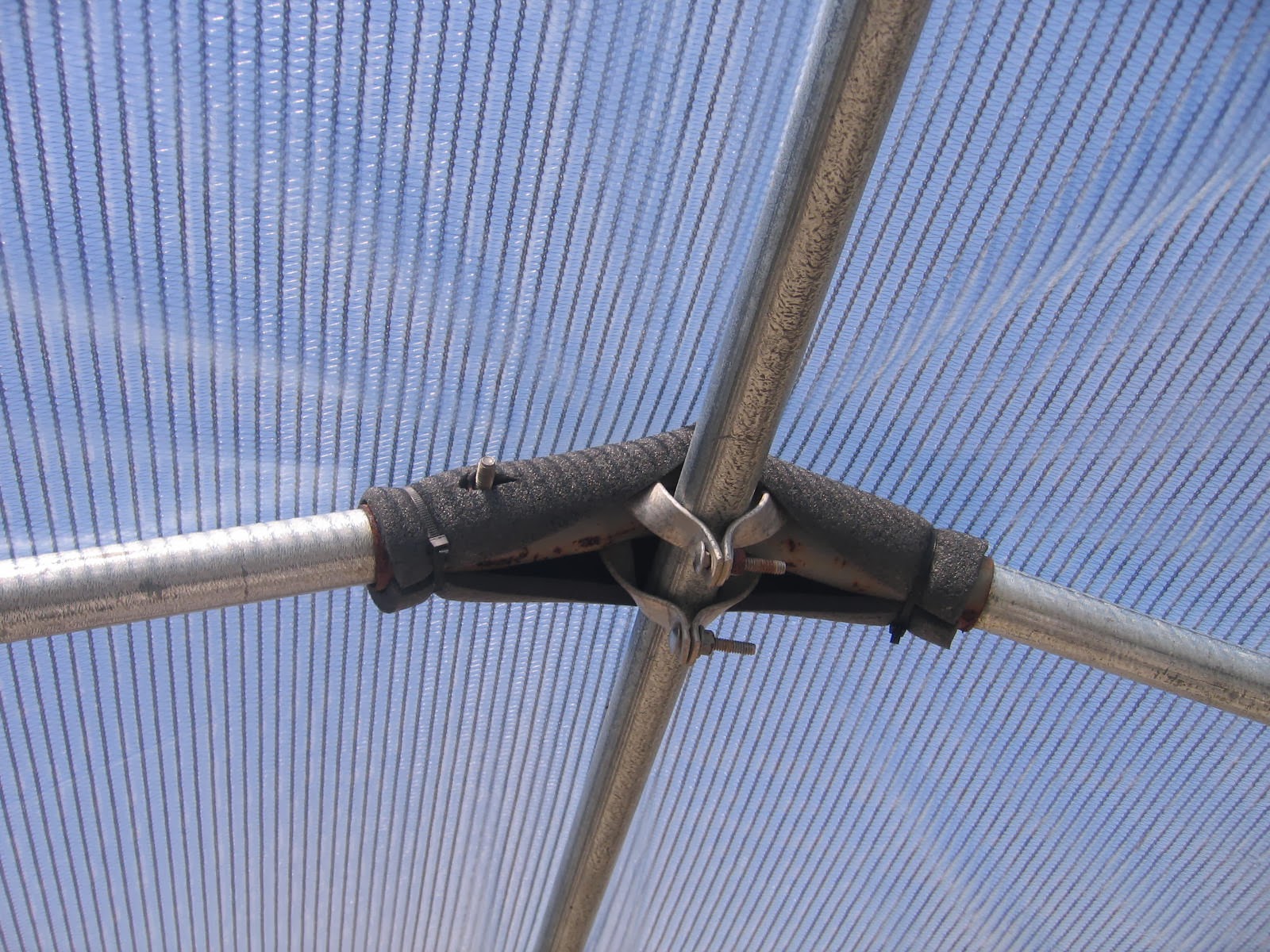 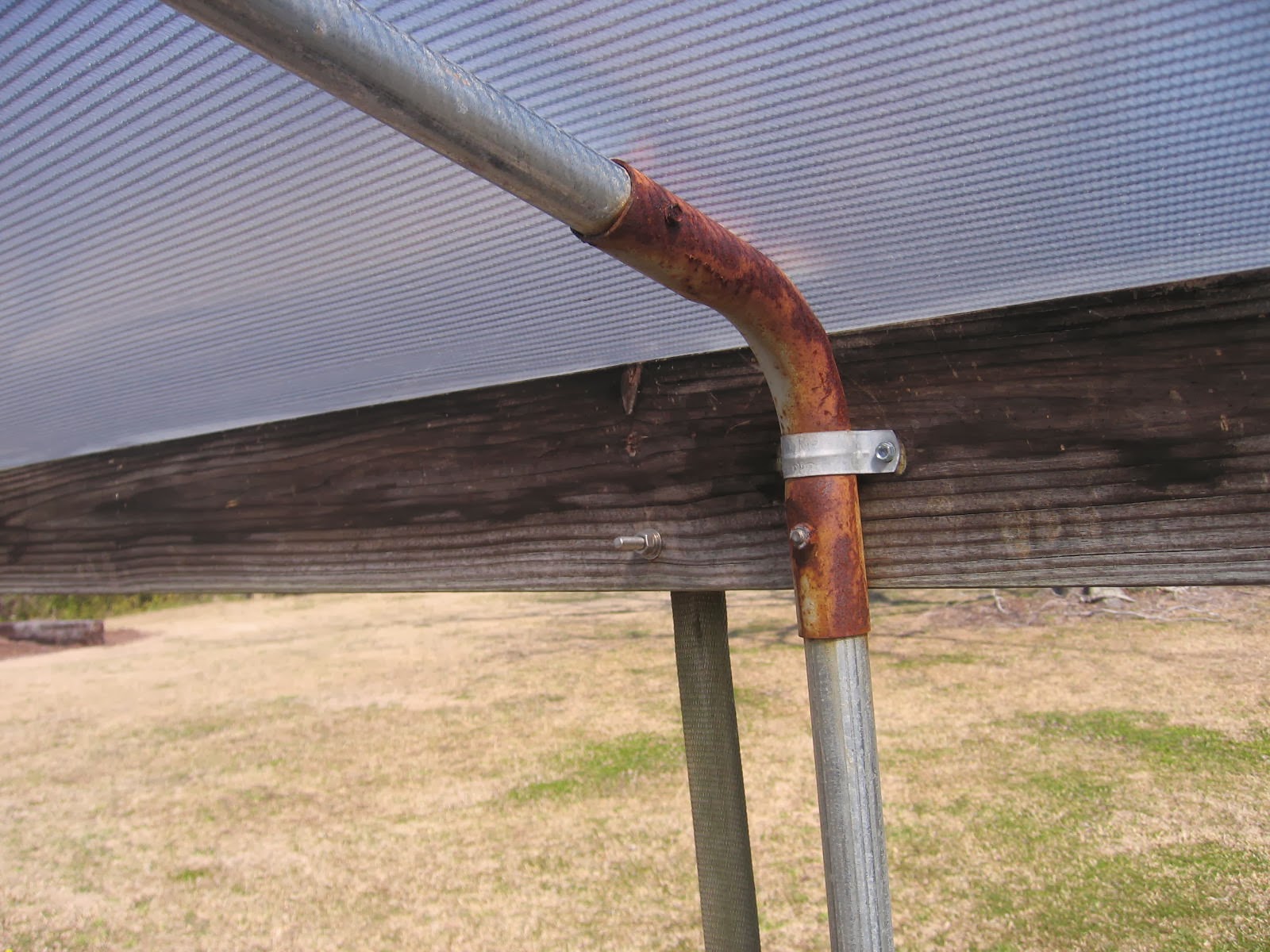 Separate time clocks allow us to use half of the house for hardwood propagation of dormant cuttings and half of the house for leafy softwood cuttings.  Each clock system consists of a 24 hr clock and a minute clock, wired in sequence so that the mist comes on intermittently during the day, but does not run at night. 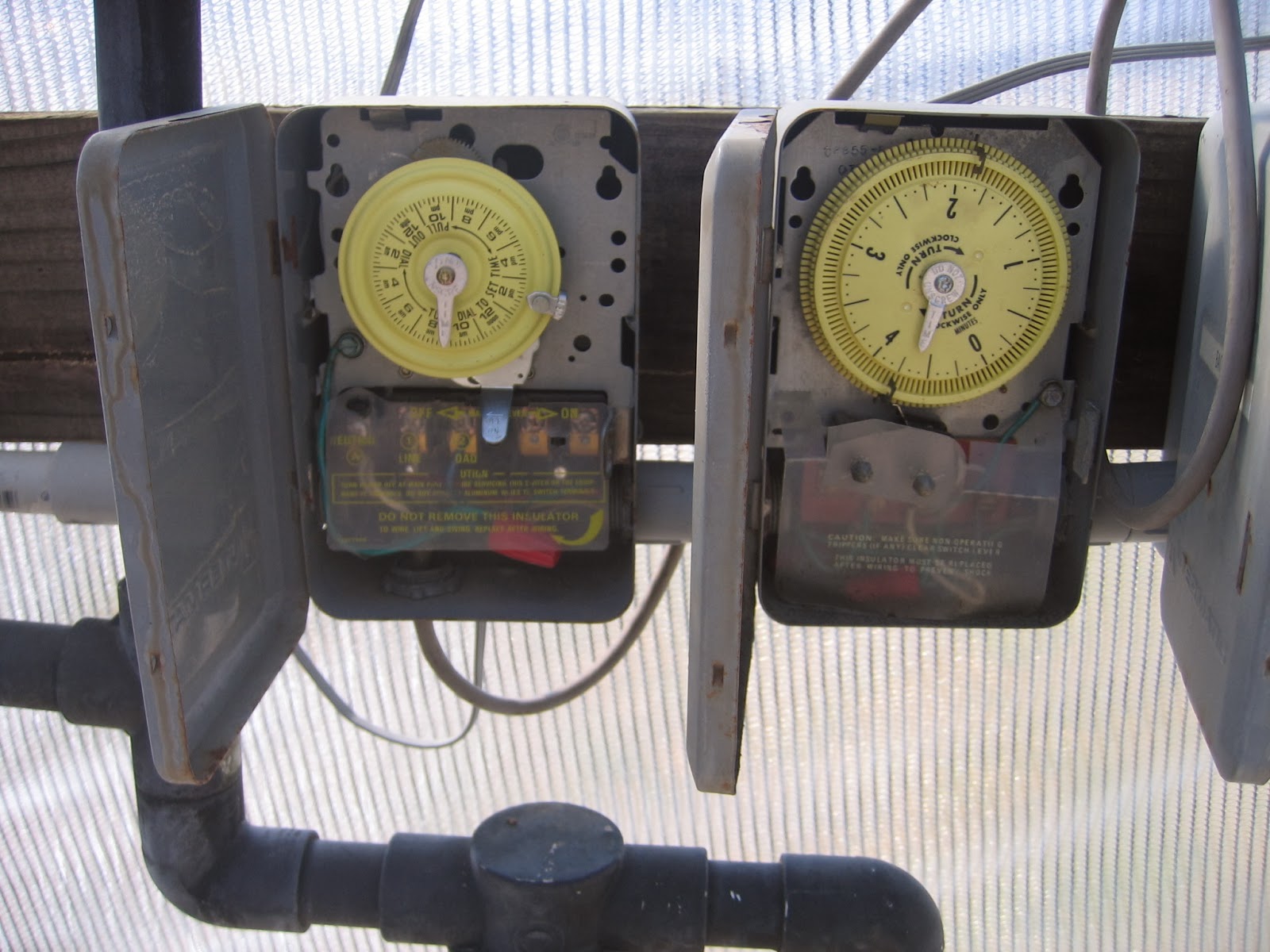 Click these links for a description blueberry propagation techniques or images. 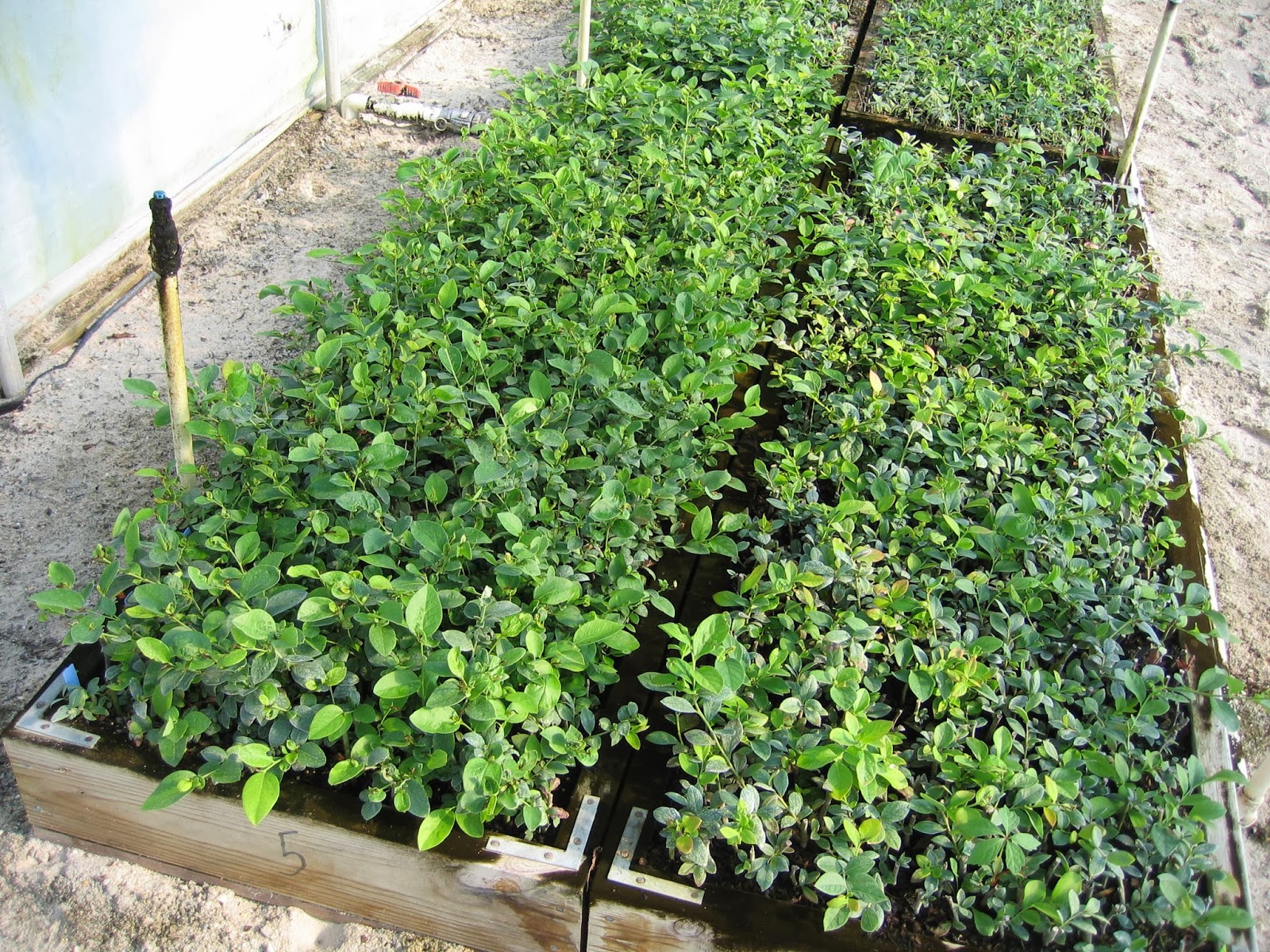 This house is used for both hardwood (winter) and softwood (summer) cuttings.  The image above shows rooted hardwood cuttings in late July.  These were dormant (winter) cuttings that were stuck in the beds in April on a 1.5 x 1.5-inch spacing.  Cuttings were hand watered until they began producing leaves in late April, then intermittent mist was used from late April through mid-July.  You can see that these cuttings are producing a second flush of  pale green leafy growth, indicating that they are rooted and watering can thus be reduced.  By late summer, hardwood cuttings are watered only as needed. This is quite different from softwood cuttings for blueberry (and muscadine grape) that are collected in summer and rooted under mist in August and September.

The annual meeting of the North Carolina Blueberry Council will be held January 14-15 at the Sampson Agri-Expo Center in Clinton.  For more information, please see:
http://ncblueberrycouncil.org/

Deer feed on blueberry flower buds in winter and early spring.  Feeding can severely impact yield, especially on young bushes whose buds are at easy browsing height.  Click on the images below to enlarge.


There is an excellent article (click here) on deer biology, feeding habits and prevention.  Our best success at the research station in Castle Hayne has been with the use of double electric fences.
Posted by Bill Cline at 4:26 PM

Mummy berry is now active in southeastern NC -- the photos below were taken yesterday.  The disease begins each spring with the emergence of the fungus from last year's infected fruit (mummies) that have overwintered on the ground.  The first sign of activity (and potential for infection) is the appearance of apothecia or "mummy cups" in spring.  Spores from these small brown cup-shaped mushrooms infect emerging blueberry shoots.  Yesterday at the NCSU Horticultural Crops Research Station in Castle Hayne, the spore-producing (infective) stage of this disease was visible on the ground underneath bushes in wet areas of some fields (click on images to enlarge):


The emergence of this fungus coincides with emergence of new shoots on blueberry bushes, so the disease will appear later in colder areas of the state where bushes are still dormant.  Fields in southeastern NC with a history of this disease should be sprayed with fungicides as soon as possible, especially in early-blooming cultivars where flower and leaf shoots are beginning to emerge. For further descriptions, and images of other stages of this disease, click here.  For specific recommendations on control, go to the NC Ag Chem Manual or the Southern Region IPM Guide.
Posted by Bill Cline at 12:59 PM

In October 2010 and again in January 2013 growers reported 'Duke' highbush blueberry fields with severe damage to roots and crowns caused by grubs feeding on the underground parts of the plants.  The grubs appear to be the larval stage of a species of Prionus beetle.

The larvae reportedly take three to five years to mature, and may be more likely to occur on stressed bushes.  Above-ground symptoms are hard to distinguish from drought stress or nutrient deficiency.  Affected bushes are weakened progressively as the larvae grow and inflect more damage.

The only way to confirm the presence of these insects is to dig bushes and examine the roots and crown for damage or larvae.  As pictured, the larvae are larger than most other grubs found in the root zone,  are widest at the head end, with strong jaws, and with bodies that are elongated rather than the typical "C-shaped" grubs of other beetles.
Posted by Bill Cline at 10:50 PM

Mummy berry is a plant disease caused the fungus Monilinia vaccinii-corymbosi.  The fungus overwinters on the ground, and in spring produces a cup-shaped mushroom that releases spores.  These spores infect and kill emerging leaf shoots, causing the shoot blight (primary) phase of the disease.  Blighted shoots then produce a second type of spore that is carried by insects to the flowers, where fruit (secondary) infection takes place.  The end result is “mummies” – berries that do not turn blue, but instead turn pink or salmon-colored and fall to the ground.  Mummy berry can be controlled with fungicides, through the use of resistant cultivars, by removal of infected fruit, and by mulching to bury any mummies remaining on the ground.  Shown below are a few photos of mummy berry at different times of the year:

DORMANT
The October photo below shows infected fruit in winter.  All berry tissue has sloughed away, leaving behind a hard, hollow structure consisting entirely of dormant fungal tissue.

PRIMARY (LEAF) INFECTION
Spores from apothecia infect new emerging leaf shoots.  This primary or leaf shoot infection occurs in March as shoots begin to emerge.  Infected shoots continue to develop and elongate, then quickly wilt and turn brown, first along the midrib of one or more leaves, then dying completely.  Infected shoots produce masses of the second spore stage, visible as a gray ash-like mass on the wilted shoot.  Infected shoots are usually visible in late March and April in eastern NC.

Fruit infection occurs when spores from infected leaf shoots are carried by insects to open flowers.  Spores germinate and enter the flower through the pollination pathway and infect the developing ovules.  Infected green berries appear normal until harvest, then turn a pinkish-tan color rather than blue, and drop prematurely.

AFTER HARVEST
Infected berries (mummies) fall to the ground and unless removed or buried, will emerge the following to re-infect the bush.
Posted by Bill Cline at 12:40 PM